The Wall Street Journal polled its readers and asked them to rate the top compliance issues of 2014. The answers were very interesting!

They asked what the top compliance-related crisis from 2014 was, and readers chose a clear winner—the Target, Home Depot and Sony hacking incidents grabbed the attention of executives everywhere, bringing home the reality that cybersecurity has become a top risk consideration in the board room. Poll participants picked the breaches 54.3% of the time, more than double the second-place finisher, the scandal surrounding the London Interbank offered rate.

Seeing the support for cyber breaches in the last question, it probably comes as no surprise that cybercrime/data privacy emerged as the issue their readers most expect to grow in importance in 2015. The final tally had 71.9% picking this answer, making it a runaway winner over the next pick, money laundering. 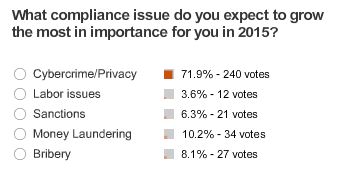 It's worth it reading the whole article, there are some other poll questions about regulations and regulators.

Note, that we have a tool called the KnowBe4 Compliance Manager which helps you to get and stay compliant, so that audits take half the time and half the cost.