Ransomware And RDP: A Dangerous Combination

A new variant of ransomware, CommonRansom, is asking for RDP access to the victim’s computer in order to decrypt files. CommonRansom is the latest attempt to extend the ransomware attack beyond the simple act of extortion. In this case, upon completing the encryption attack, the ransomware leaves a decryption note as a text file asking for both a Bitcoin ransom, as well as complete administrative RDP access to the infected endpoint. 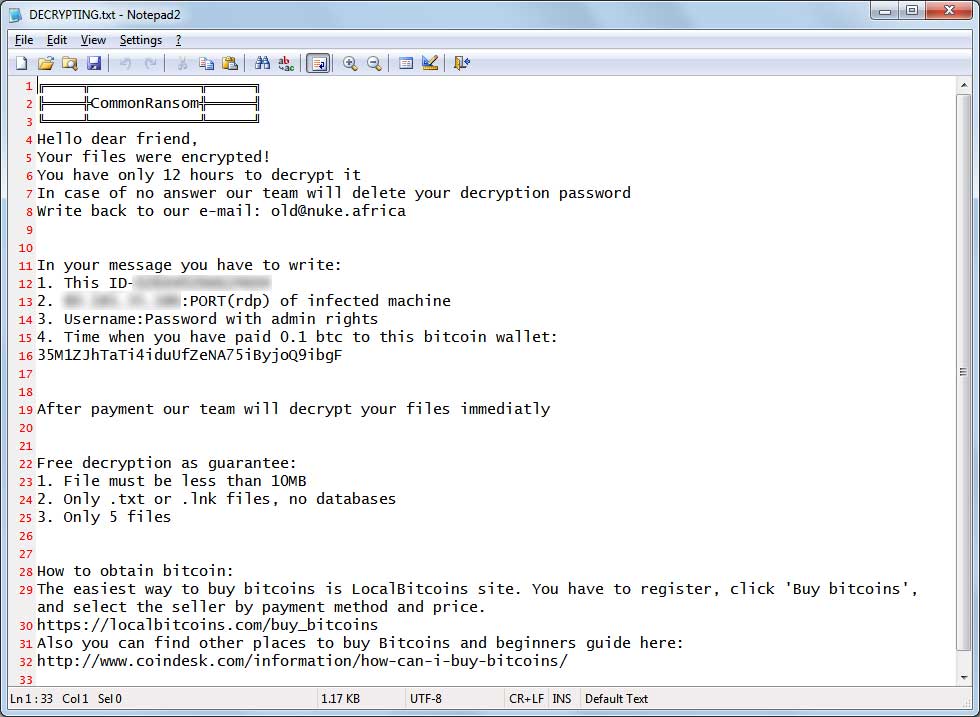 In this case, the inclusion of the RDP request is somewhat timely, as the RDP attack vector is in very high demand.

According to Positive Technologies, there’s a 2:1 ratio of demand for RDP access over the current “supply”. RDP credentials sell for as high as $100 on the Russian xDedic website, but generally go for between $3-15 on the dark web.

Given the relatively low amount of return those behind CommonRansom would get from selling RDP credentials (in comparison to their asking for the .1 BTC which, at the time of writing, is worth about $640), it’s more likely they plan on utilizing the credentials themselves, looking for a foothold within an organization, or endpoint-based data that could be of value.

So, the obvious recommendation is to NEVER provide the credentials, as attackers can steal data, further infect the endpoint, and lock everyone out of the entire machine.

While this scenario seems a bit preposterous – to think a user would give up RDP access (if they even knew how) is a bit outlandish. But, we’ve seen data suggesting users are embarrassed to let IT know they’ve become a victim, mixed with a mentality that it’s ok to share passwords with co-workers, and you may have users who think giving up RDP access is the best option.

So, what do you do about it?

The addition of RDP into the ransomware equation may prove to be short-lived. But while it’s here, it’s important to make sure cybercriminals don’t succeed.