More Than 16 Million Devices Are Infected With Mobile Malware 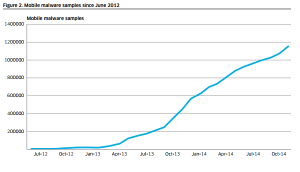 Security experts noticed a significant increase in cyber threats to mobile and residential devices and attacks on communications networks in 2014. A growing number of sophisticated attacks are threatening personal and corporate information representing a serious menace to the security of enterprises and users’ privacy.
The “Motive Security Labs H2 2014 Malware Report” published by Alcatel-Lucent’s Motive Security Labs provided a detailed analysis of trends and statistics for malware infections in devices. The experts confirmed an acceleration in the growth of infections related to mobile devices, with an increase of 25% in 2014, compared with 20% in 2013. The main cause for infections is social engineering; people ckicking on links they get on their smartphone. A large part of the 12 million new malware strains per month are mobile malware.
“Currently, 0.68% of mobile devices are infected with malware. This is a growth of 25% in 2014. We can use this infection rate to calculate the total number of infected smartphones worldwide. According the ITU there are currently 2.3 billion mobile broadband subscriptions, so we estimate that 16 million mobile devices had some sort of malware infection in December 2014. This global estimate is likely on the conservative side because our sensors do not have complete coverage in areas such as China and Russia, where mobile infection rates are known to be higher than average. ” states the report. More at his blog:
Step end users through our Mobile Device Security security awareness training module. Find out the cost today.