AV-TEST: "There are now 12 million new malware variants per month"

The AV-Test reported that they found 143 Million new malware samples in 2014 and 12 million new variants per month.

Independent IT security institute AV-Test regularly publishes a great statistic about the number of malware strains. Their new report reveals there are now a whopping 12 million new variants per month.

The AV-TEST Institute registers over 390,000 new malicious programs every day. These are examined using their proprietary analysis tools and classified according to their characteristic. Visualisation programs then transform the results into diagrams that are updated regularly and produce current malware statistics.

Looking at the last year, the month with the greatest number of new threats was August, when over 18 million new samples were identified by AV-Test. No wonder that antivirus can't keep up. The stats reported a total amount of new malicious software in 2014 of 143 million, an amazing amount that shows this is automated on a (criminal) industrial scale. The data shows an exponential growth in new cyber threats recorded over the years. The number of new malware strains in 2014 is significantly higher than earlier years. 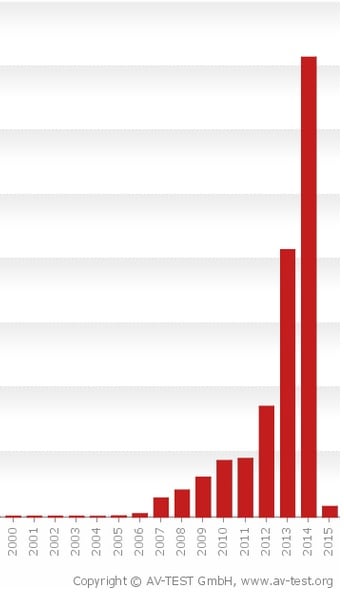 Much more data at the original article over at: https://www.av-test.org/en/statistics/malware/

These numbers show again that you need to work hard on your defense-in-depth. And to start out with, by far the best bang for your IT security budget is effective end-user education. Find out how affordable this is for your organization:

(Hat Tip to Pierluigi Paganini who dug this one up.)