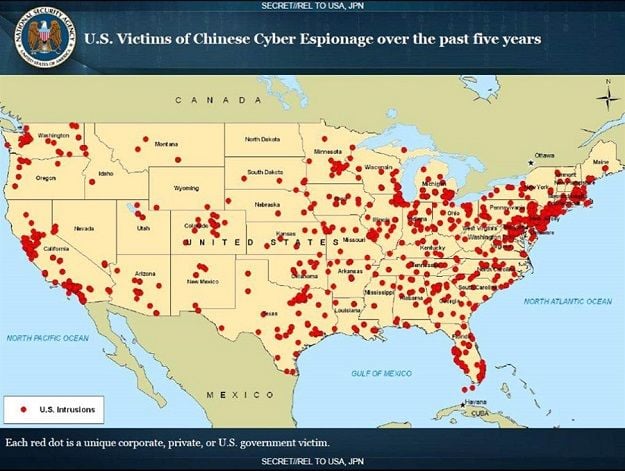 I have been talking for years at this blog about the Chinese hacking into the U.S. for mainly espionage, using highly sophisticated social engineering and spear-phishing attacks. This week, NBC News got their hands on leaked slides from a February 2014 NSA presentation which highlight in specific detail the extent to which China has successfully hacked U.S. organizations, which illustrate my point. It's great ammo to get more IT security budget.

As indicated by the map above, each red dot represents a successful Chinese hack, stealing corporate and military secrets and data about America’s critical infrastructure, particularly the electrical power and telecommunications and internet backbone. Add them up and there were about 700 successful hacking attempts on U.S. targets over the last five years. And that's only the ones we know about.

As you would expect, the successful hacks are mostly in California and in the DC and Maryland area.

As for the type of data the Chinese hackers were able to exfiltrate, it was information as varied as pharmaceutical products to details surrounding both U.S. military and civilian air traffic control systems.

The report further adds that the map above was originally prepared as part of a larger briefing by the NSA Threat Operations Center. During said briefing, officials reportedly indicated that China has a particular interest in keeping tabs on Google and “defense contractors like Lockheed Martin, and in air traffic control systems.”