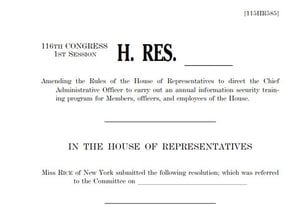 A bill introduced last week requires all members, officers and employees of the U.S. House of Representatives to undergo cybersecurity training.

The Congressional Cybersecurity Training Resolution of 2019 is sponsored by Rep. Kathleen Rice and Rep. John Katko. It requires the U.S. House’s Chief Administrative Officer to carry out annual cybersecurity trainings to ensure that members and staff are aware of the threat of cyberattacks and they have the knowledge and skills needed to protect government systems.

This type of training is already required for House employees and officers, but the bill wants to make it mandatory for all members. The annual training would need to be completed every year by January 31. The bill orders new members to undergo cybersecurity training within 30 days after beginning service as part of their onboarding.

“If we want to effectively counter those threats, then we need to make sure Members of Congress are equipped with the tools and knowledge to play an active role in this fight. Our employees and House officers are already required to take mandatory information security training, and it’s past time that Members are held to the same standard and bear the same responsibility,” Rep. Rice said.

We want to make sure we avoid the mistakes of the past, using the old school awareness training model --- herding newbies in the break room, keeping them awake with coffee and donuts and then stepping them through the death-by-PowerPoint that gave awareness training a bad rap in the first place:

"While it is encouraging to see that lawmakers are looking to improve cybersecurity training to house members, it is unfortunate to realize that they are a few years behind when it comes to best practices. In the past couple of years, the majority of companies that fell prey to cyber-attacks had an annual training in place which proved to be worthless when a real attack was launched,” Shlomi Gian, CEO at CybeReady, a provider of autonomous cyber security awareness solutions, told SecurityWeek.

Could not agree more!  Congress needs to be protected with new-school security awareness training!

And while we are in Washington DC...

May 10 & 13, 2019 - Legislators in the US House of Representatives have introduced the Election Security Act, which would require the president to establish a “national strategy for protecting democratic institutions.” It would also establish security standards for voting system vendors to abide by cybersecurity standards and would require that states use paper ballots.