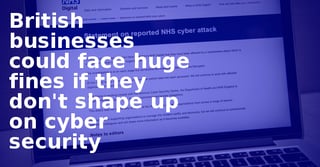 The UK government has warned that Britain's most critical industries must boost their cybersecurity or face potentially hefty fines under the EU's Networks and Information Systems Directive (NISD).

The warning comes less than four months before the deadline for the NISD, adopted by the EU on July 6, 2016, to be transposed into EU member states' national laws (May 9, 2018, which aligns with the date for GDPR enforcement).

NISD is designed to ensure the security of network systems not already covered by the GDPR -- but its primary purpose is to ensure the security of the industries that comprise the critical infrastructure (such as power and water, healthcare and transport). These companies, or covered entities, are defined within the directive as 'operators of essential services' (OES), and 'digital service providers' (DSPs).

Since it is a Directive rather than a Regulation, the NIS Directive has some national flexibility in its implementation. For example, the UK government had earlier proposed that maximum fines under the directive should be between €10 million and €20 million or 2% to 4% of annual global turnover. It has now settled on a maximum fine of €17 million.

The government announcement on Sunday stems from its published response (PDF) to a public consultation it initiated in August 2017.

Most of the critical industries will have customer databases, and that could make them liable to GDPR  as well as NISD, plus any existing sector-specific regulations. "Under this new legislation," warns Andy Miles, CEO of KnowBe4 partner ThinkMarble, "companies could potentially be fined under the GDPR, the Government and by a regulator, so there is a risk of double or even triple jeopardy here."

The government's response document specifies the regulator (or 'competent authority') for the different critical sectors. This is often the government itself; that is, the relevant Secretary of State for that sector -- although it is the Information Commissioner (ICO) who is the competent authority for digital service providers just as with the GDPR.

This could lead to confusion and lack of consistency since Secretaries of State change, and different enforcement levels could change rapidly in line with a changing political situation. "I believe that the NCSC, working alongside the ICO, should take the lead in putting these sanctions in place -- and the regulators should feed into them, not the other way around," suggests Miles.