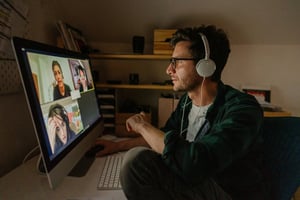 This alarming bit of news about U.K. remote workers comes at the worst time when attacks are on the rise, insecure personal devices are being used, and workers are more susceptible to attack.

We could see this coming a mile away – remote workforces simply aren’t prepared to fend of cyberattacks.  And new data from Norway-based app-protection firm, Promon, reinforces this with their findings that remote workers firmly represent the statement “don’t know, don’t care.” According to the data:

In and of itself, this is disturbing, given the ever-changing nature of attack tactics, methods, techniques, attack vectors, and scam types used to trick users into giving up credentials, installing malware, committing fraud, and providing confidential information.

To make matters worse, the story doesn’t end there.  Again, according to Promon:

So, now we have remote workforce that has no idea how very much they need to be vigilant against cyberattack thinking they don’t need to worry about it at all.

And, as if you can’t make remote working a more injurious scenario for organizations, the data gets more dismal:

These devices are most likely not as secure as corporate devices, nor are they protected by the security layers afforded in-office devices.

This is bad news for organizations and great news for the bad guys!

Organizations with remote workforces need to instill a sense of importance around users participating in the organization’s security stance.  Given the majority of remote workers are using less-than-secure devices, it’s imperative that they be enrolled in continual Security Awareness Training to help create a vigilant and attack-resistant remote workforce.