The Total Risk Value of Cybercrime Has Risen to $5.2 Trillion Over the Next Five Years 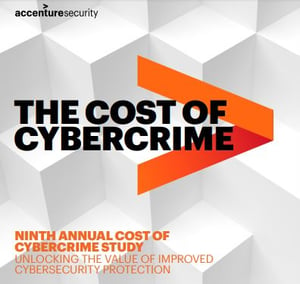 According to new data from Accenture, the average company sees 145 security breaches annually, with the cost of experiencing any kind of cyberattack rising.

Cybercrime is becoming more sophisticated, according to Accenture’s latest report, 2019 The Cost of Cybercrime. Information theft has long been a standard target. But now attackers are seeking to threaten data integrity, and maliciously take down operations – all elevating the cost of cybercrime to historical levels.

According to the report, the average cost of cybercrime for an organization is $13 Million. Some of the more notable contributors to the $13 Million price tag include:

“Humans are the weakest link” states the report, citing “employees need the tools and incentives to help them to define and address risks”. Despite this, the average organization only spend 2.8% of its budget on cybersecurity – with very little going to addressing this problem. According to the report, “training employees to think and act with security in mind is the most underfunded activity in cybersecurity budgets.”

Those organizations utilizing Security Awareness Training are the ones who are enabling the proper defenses to shore up the “weakest link” in your security strategy. It’s no longer enough to simply assume that security software is going to protect the organization; it’s time to assume the bad guys are smart enough to make their way to where your security is the weakest – and do something about it.