The internet's 'father' says it was born with two big flaws 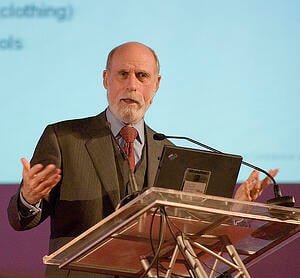 BusinessInsider just posted an article that confirms something I have been saying for years. There is some contrary data though. We may be looking at a light version of rewriting history. Here are the highlights they started with:

You might chalk up the lack of IP addresses to a lack of vision. When Cerf was helping to set up the internet, it was simple experiment, and he couldn't really imagine it getting as large as it became.

The security flaw, on the other hand, can be chalked up, at least in part, to simple expediency, Cerf said in a recent interview with Business Insider. "I had been working on this for five years," he said. "I wanted to get it built and tested to see if we could make it work." "It would not have aided my sense of urgency to have to ... have to stop for a minute and integrate the public-key crypto into the system," he said. "And so we didn't." Security "is retrofittable into the internet," he said.

There is this little event of the NSA in 1978 resisting the idea that TCP/IP should be encrypted. I have written a blog post with a summary of a very large article in the Washington Post which goes into great detail about how the Internet was created. A quote from this summary: "Computer scientists Vinton Cerf and Robert Kahn attempt to build encryption technology directly into TCP/IP, a set of protocols that will give rise to the internet several years later. But the scientists run into a series of obstacles, including resistance from the US National Security Agency."

Here is the whole fascinating timeline, a warmly recommended 5-minute read with details almost no one remembers: How The NSA Killed Internet Security In 1978.  At the end is a link to the full article in The Post.