The rate at which cyberattacks are increasing are being noticed by both their victims and the FBI, who are seeing more people affected by online crimes and scams.

Cyberattacks are occurring at an all-time rapid pace. The FBI recently announced a staggering statistic providing some insight into just how quickly that pace is increasing. According to an IC3 recent post, it took seven years for the FBI to collect its first million complaints. That is compared to the most recent million complaints only taking slightly more than one year, less than half the time it took for the previous million. 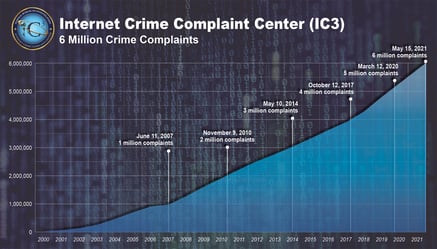 According to the FBI, complaints of cyberattacks and scams increased nearly 70% between 2019 and 2020 (no 2021 data has been released). The top three crimes reported by victims in 2020 were phishing scams, non-payment/non-delivery scams, and extortion. The first is an attack technique, whereas the last two are social engineering themes. It’s important to realize that while email is a primary attack vector for most cyberattacks, cybercriminals can take any path they deem appropriate – phone, SMS/text, email, online, or a combination therein.

The staggering growth of the number of complaints is a reflection of both an understanding of the availability of the FBI’s complaint center, as well as the massive increase in the number of attacks. With “as a service” models for most attacks springing up daily, it’s relatively easy for just about anyone to join in and become a cybercriminal.

Keeping cybersecurity vigilance high in the workplace is always my recommendation. Using Security Awareness Training continually keeps your users up-to-date of the latest types of attacks, scams, social engineering tactics, and threats, so users know what to look for and how to avoid falling for an attack.