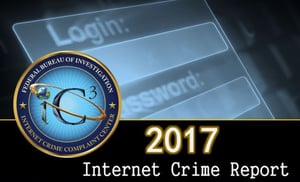 The report compiles data from a total of 301,580 complaints which reported losses of over $1.4 billion. In addition to an explanation of the IC3’s history and operations, the report includes five “hot topics” from 2017: business email compromise (“BEC”), ransomware, tech support fraud, extortion, and the Justice Department’s Elder Justice Initiative.

Note that KnowBe4 has a free one-hour, 8-section Internet Security Awareness Course for all ages, which we strongly recommend you send to your friends and family. The address is: https://www.knowbe4.com/homecourse and to make it easy for everyone, the password is   homecourse