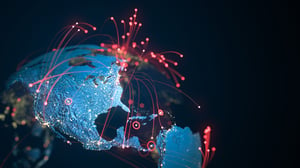 Over the past four months, the UK’s National Cyber Security Centre (NCSC) has shut down more than 300,000 URLs linking to investment schemes that fraudulently claim to be endorsed by celebrities. The scammers are using fake news articles with phony quotes from Sir Richard Branson, Ed Sheeran, Martin Lewis, and others.

NCSC Chief Executive Officer Ciaran Martin stressed that while the government can take these scams down, the general public plays a large role in identifying and reporting them.

“These investment scams are a striking example of the kind of methods cyber criminals are now deploying to try to con people,” Martin said. “We are exposing them today not only to raise public awareness but to show the criminals behind them that we know what they’re up to and are taking action to stop it. I would urge the public to continue doing what they have been so brilliantly and forward anything they think doesn’t look right to our Suspicious Email Reporting Service.”

Sir Richard Branson, one of the top celebrities who was impersonated, likewise urged people to be wary of what they trust online.

“We have dealt with hundreds of instances of fake sites and fraudsters impersonating me or my team online,” Branson said. “We are working in partnership with organisations such as NCSC to report these sites and do all we can to get them taken down as quickly as possible. Sadly, the scams are not going to disappear overnight, and I would urge everyone to be vigilant and always check for official website addresses and verified social media accounts”

Commander Clinton Blackburn from the City of London Police said users should be on the lookout for offers that seem too good to be true.

“These figures provide a stark warning that people need to be wary of fake investments on online platforms,” Blackburn said. “Celebrity endorsements are just one way criminals can promote bogus schemes online. People should not be fooled by images of luxury items such as expensive watches and cars, and posts on social media showing extravagant lifestyles, which are often used to persuade you to invest. To those of you who might be tempted, remember not every investment opportunity is genuine. Criminals will do all they can to make their scams appear legitimate. It is vital you do your research and carry out the necessary checks to ensure that an investment you are considering is legitimate.”

New-school security awareness training is one of the best ways to combat scams. The more people that can identify social engineering techniques, the harder it is for scammers to isolate gullible victims.

The NCSC has the story.