Someone Hacked The Four Top Russian Cybercrime Forums In One Month 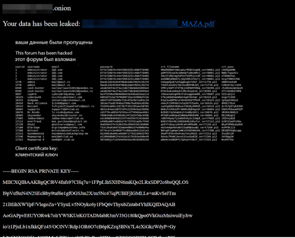 Intrepid investigative cyber security reporter Brian Krebs has some interesting news. He said: "Over the past few weeks, three of the longest running and most venerated Russian-language online forums serving thousands of experienced cybercriminals have been hacked. In two of the intrusions, the attackers made off with the forums’ user databases, including email and Internet addresses and hashed passwords. Members of all three forums are worried the incidents could serve as a virtual Rosetta Stone for connecting the real-life identities of the same users across multiple crime forums.

On Tuesday, someone dumped thousands of usernames, email addresses and obfuscated passwords on the dark web apparently pilfered from Mazafaka (a.k.a. “Maza,” “MFclub“), an exclusive crime forum that has for more than a decade played host to some of the most experienced and infamous Russian cyberthieves.

At the top of a 35-page PDF leaked online is a private encryption key allegedly used by Maza administrators. The database also includes ICQ numbers for many users. ICQ, also known as “I seek you,” was an instant message platform trusted by countless early denizens of these older crime forums before its use fell out of fashion in favor of more private networks, such as Jabber and Telegram."

Someone is sending a message.  Not too hard to guess who. Here is the full story: