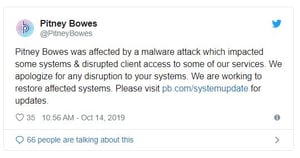 TechCrunch reported that shipping tech giant Pitney Bowes has confirmed a cyberattack on its systems.

The company said in a statement that its systems were hit by a “malware attack that encrypted information” on its systems, more commonly known as ransomware.

“At this time, the company has seen no evidence that customer or employee data has been improperly accessed,” the statement said, but many of its internal systems are offline, causing disruption to client services and other corporate processes.

The company said it’s working with a third-party consultant to address the issue. But it’s not immediately known what kind of ransomware encrypted its systems. A spokesperson, when reached, did not comment beyond the published statement.

Pitney Bowes is a widely used shipping tech company that provides mailing services to sellers, with more than 1.5 million clients across the world, including the Fortune 500. The company allows sellers to make mailing items and goods easier and more efficient, and is widely used by sellers in marketplaces like Etsy and Shopify.

Several customers on Twitter complained that they were unable to perform basic tasks on their account. It’s known that some account and product support pages, and downloads, are unavailable.