KrebsOnSecurity heard from three different readers who received a similar email in the past 72 hours. In every case, the recipients said the password referenced in the email’s opening sentence was in fact a password they had previously used at an account online that was tied to their email address.

However, all three recipients said the password was close to ten years old, and that none of the passwords cited in the sextortion email they received had been used anytime on their current computers.

Krebs commented: "I suspect that as this scam gets refined even more, perpetrators will begin using more recent and relevant passwords — and perhaps other personal data that can be found online — to convince people that the hacking threat is real."

We agree. There are billions of hacked passwords out there now, that can be used for any number of nefarious phishing scams. Here is a new way to find out of any of your users' breached passwords are out there. 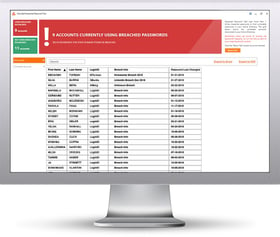 A whopping 25% of employees are using the same password for all logins. What if that password is available on the dark web? A massive amount of passwords are compromised due to data breaches and used by the bad guys for attacks. Are any hacked passwords in use within your organization?

Using breached passwords puts your network at risk. Password policies often do not prevent employees using known bad passwords. Making your users frequently change their passwords isn’t a good solution either. It only takes one compromised password match for the bad guys to gain access.

KnowBe4’s complimentary NEW Breached Password Test (BPT) checks to see if your users are currently using passwords that are in publicly available breaches associated with your domain. BPT checks against your Active Directory and reports compromised passwords in use right now so that you can take action immediately!

Find out now which users are using hacked passwords!