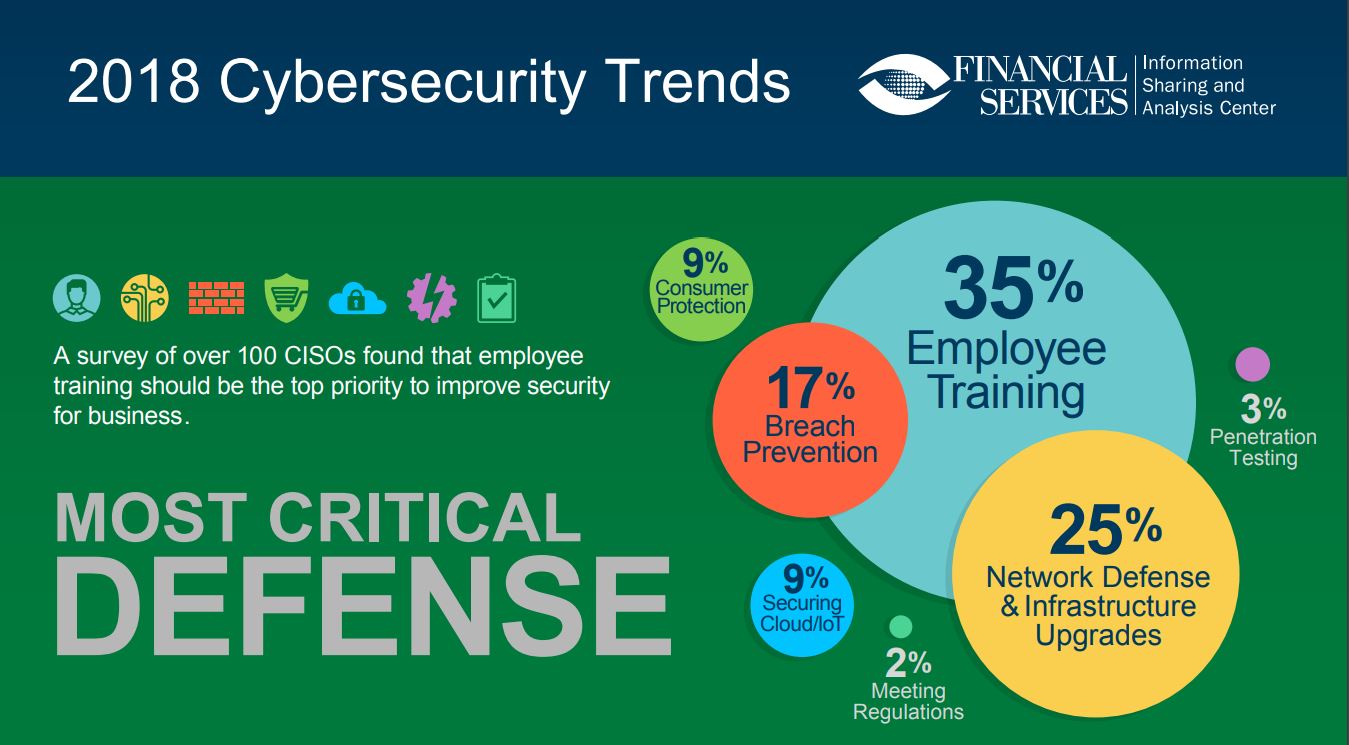 The Financial Services Information Sharing and Analysis Center (FS-ISAC) polled more than 100 of its 7,000 global members to produce the first of its planned annual CISO Cybersecurity Trends Study. ISACs are non-profit organizations, usually relevant to individual critical infrastructure sectors, designed to share threat information among their members and with relevant government agencies. They were born from Bill Clinton's 1998 Presidential Decision Directive PDD 63.

The FS-ISAC's 2018 Cybersecurity Trends Report (PDF) notes a distinction in priorities based on the individual organization's reporting structure. Where CISOs report into a technical structure, such as the CIO, the priority is for infrastructure upgrades, network defense and breach prevention. Where they report into a non-technical function, such as the COO or Legal, the priority is for staff training.

This could be as simple as CISOs prioritizing areas for which they are most likely to get funding. However, that staff training is considered the overall priority does not surprise Dr. Bret Fund, founder and CEO at SecureSet.

"I think that speaks to CISOs seeing first-hand how their largest risks of breach rest in the people component vs. the product or process components," he suggests. "Executives and Boards cannot underestimate the need for a robust security culture inside their organizations; and the way that you achieve that is through proper education and training."

Dan Lohrmann, chief security officer at Security Mentor, agrees. "The mission-essential business aspects that end user security awareness training is now playing in global financial organizations must be front and center surrounding around all data handling and incident response." He recommends metrics-based training so that progress can be monitored.

The report finds no common reporting structure within financial organizations. Only 8% of CISOs report directly to the CEO. Sixty-six percent report to the CIO (39%), the CRO (14%) or the COO (13%). Despite these differences, there appears to be no impact on the frequency of reporting to the board of directors on cybersecurity.

There is no indication within the report on structural trends, which could provide an insight into the evolving role of the CISO. Greg Reber, CEO at AsTech, thinks this is an omission. "At AsTech, we see moves away from CISOs reporting to CIOs, as the incentives can be at odds," he explains. "CIOs may need to get things done quickly to realize financial goals -- moving processing to the cloud environments for example -- while CISOs are chiefly concerned with risk management."

He also notes a failure to comment on cyber risk insurance. "This falls into an 'event response' category, which we see as a top priority.However, it didn't appear in the top three responses in this survey." Reber equates 'cyber defense' with a Maginot Line philosophy, and believes resources should be balanced between defense and response.

"This report from FS-ISAC highlights the continued need for cyber awareness and vigilance from staff," comments Stephen Burke, founder and CEO at Cyber Risk Aware. "Hackers are great at exploiting human nature, using social engineering tactics to gain their victims' trust. Once they can get through defense and onto a user's machine they may use sophisticated methods to stealthily move laterally across a network stealing data or credentials."

FS-ISAC's recommendations to its members based on its survey findings is that staff training should be prioritized regardless of the reporting structure. "People can be the solution to these growing online risks, or they can be contributors to the growing level of security problems," says Lohrmann. "Effective security awareness training will enable the enterprise to successfully stop cyberattacks."

Security awareness firms have been the subject of significant funding and M&A transactions in recent months.