Schneier: Sony Hackers May Have Had Inside Help 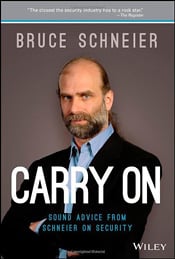 Well-known IT Security guru Bruce Schneier commented on recent discoveries related to the Sony Hack. First of all, an analysis of the timestamps on some of the leaked documents shows that they were downloaded at USB 2.0 speeds -- which implies help from an insider who downloaded the file to a USB stick.

Other evidence implies insiders as well. Some investigators believe the disgruntled former employee or employees may have joined forces with pro-piracy hacktivists, who have long resented the Sony's anti-piracy stance, to infiltrate the company's networks.

The FBI still blames North Korea, although it is now thinking that the North Koreans hired outside hackers.

He also wrote that bluffing about this is a smart strategy for the US government:

...from a diplomatic perspective, it's a smart strategy for the US to be overconfident in assigning blame for the cyberattacks. Beyond the politics of this particular attack, the long-term US interest is to discourage other nations from engaging in similar behavior. If the North Korean government continues denying its involvement, no matter what the truth is, and the real attackers have gone underground, then the US decision to claim omnipotent powers of attribution serves as a warning to others that they will get caught if they try something like this.

Of course, this strategy completely backfires if the attackers can be definitely shown to be not from North Korea. Stay tuned for more.

When insiders become hackers and are able to walk out with hundreds of megabytes of data, it's obvious that the defense-in-depth of that organization has failed. The outer layer of your defense-in-depth strategy is Security Policy, Procedures and Awareness, with security awareness training being a crucial part of this.

I recommend you read his full blog post - Schneier is a great guy to follow as well, always great insights.