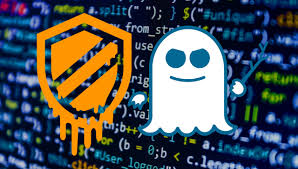 We sent out some warnings and advisories last week about Spectre and Meltdown, but we want to remind everyone again about some steps you can take to protect yourself.

Remember that the bad guys are also going to jump on this bandwagon with phishing attacks! Here is a live one, just picked from the wild: 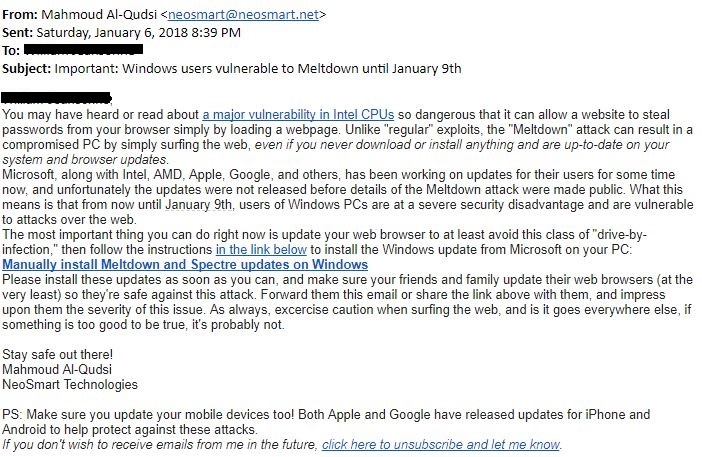 For the most part protecting your network comes down to applying the many patches vendors have been rolling out since the bugs broke into public awareness.

There are three of them, and they essentially enable side-channel attacks and information theft as an unfortunate side effect of the chips having been engineered for speed and efficiency by performing speculative execution.

"Meltdown" (CVE-2017-5754) is a flaw that lets ordinary applications cross the security boundaries enforced at chip level to protect access the private contents of kernel memory. This bug has been found in Intel chips produced over the last decade.

The other two vulnerabilities are being called "Spectre" (CVE-2017-5753 and CVE-2017-5715), and these are more insidious and widespread, having been found in chips from AMD and ARM as well as Intel.

Spectre could enable an attacker to bypass isolation among different applications. Some early reports began to appear at the end of the first week in January that Meltdown at least was being exploited in the wild.

It's also good to remember that an incident like this not only presents you with a challenge, but also with an opportunity to raise awareness and shore up your security. Five things are worth noting:

I suggest you send the following to your employees, friends, and family. You're welcome to copy, paste, and/or edit:

You may have read in the press or seen our earlier announcement that it was recently discovered that practically all computer systems worldwide have a hardware bug called "Meltdown" and "Spectre". Hardware and software vendors have been working hard to create software patches to get around this problem and we are in the process to apply these patches on our whole network.

However, bad guys are using this major event to try to trick you into downloading malware that claims to be a patch for the "Meltdown" and "Spectre" hardware issue. Don't fall for it!

In the office, IT will take care of all patching and will notify you about it. Do not act on any emails or popups that tell you to urgently update your computer. At the house, take the same precautions. Patches should only come from official sources like the manufacturer of your PC or the developers of your Operating System (Microsoft Windows or Apple Mac).

The New York Times published an accessible overview of the issue here: https://www.nytimes.com/2018/01/04/technology/meltdown-spectre-questions.html?_r=0