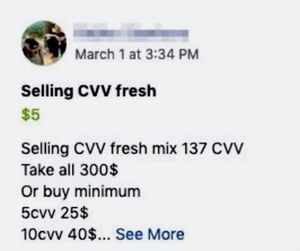 A monthslong study by Cisco Talos has identified 74 Facebook cybercrime groups with a total of 385,000 members. While some groups resembled market places for illicit goods such as payment-card information, compromised user accounts and phishing tools, others were populated by crooks ready to commit a great variety of cybercrime ‘services.’ All groups have now been removed by the social media giant.

A striking finding of the research is how easy it was for users to find and join groups. According to the report: “A simple search for groups containing keywords such as “spam,” “carding,” or “CVV” will typically return multiple results.

Of course, once one or more of these groups has been joined, Facebook’s own algorithms will often suggest similar groups, making new criminal hangouts even easier to find.” Rather than actively searching for and cracking down on these illegal groups, Facebook appeared to rely on users to report them.  Arstechnica has the full story