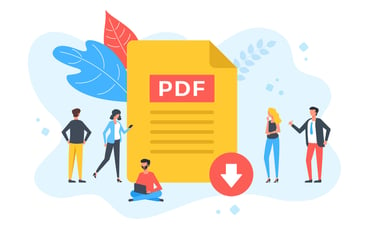 Phishing attacks using PDF files have spiked over the past year, according to researchers at Palo Alto Networks’ Unit 42.

“From 2019-20, we noticed a dramatic 1,160% increase in malicious PDF files – from 411,800 malicious files to 5,224,056,” the researchers write. “PDF files are an enticing phishing vector as they are cross-platform and allow attackers to engage with users, making their schemes more believable as opposed to a text-based email with just a plain link.”

The most common form of PDF phishing lures used an image of a fake CAPTCHA to trick victims into clicking the “Continue” button, which led to a malicious site. Another variant used an image that purported to be a coupon, and told victims to click the image in order to get 50% off on a product.

A third type of PDF phishing attack used images that appeared to be paused videos, but led to a phishing site when users clicked on them.

“These phishing files do not necessarily carry a specific message, as they are mostly static images with a picture of a play button ingrained in them,” Unit 42 says. “Although we observed several categories of images, a significant portion of them either used nudity or followed specific monetary themes such as Bitcoin, stock charts and the like to lure users into clicking the play button.”

The researchers conclude that users need to pause and think when they receive a suspicious file.

“Data from recent years demonstrates that the amount of phishing attacks continues to increase and social engineering is the main vector for attackers to take advantage of users,” the researchers write. “Prior research has shown that large-scale phishing can have a click-through rate of up to 8%. Thus, it is important to verify and double check the files you receive unexpectedly, even if they are from an entity that you know and trust. For example, why was your account locked out of nowhere, or why did someone share a file with you when you least expected it?”

New-school security awareness training can give your employees a healthy sense of skepticism so they can avoid falling for these attacks.

Palo Alto Networks has the story.