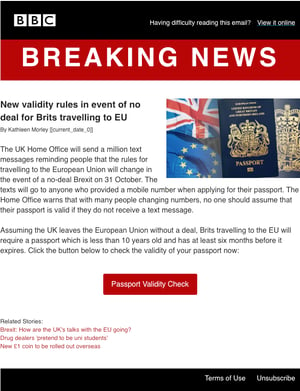 The Register reported: "The UK Home Office will send a million text messages reminding people that the rules for travelling to the European Union will change in the event of a no-deal Brexit on 31 October.

The texts will go to anyone who provided a mobile number when applying for their passport. The Home Office warns that with many people changing numbers, no one should assume that their passport is valid if they do not receive a text message.

Assuming the UK leaves the European Union without a deal, Brits travelling to the EU will require a passport which is less than 10 years old and has at least six months before it expires. Previously Brits could travel to Europe as long as their passport would not expire before they returned to the UK.

The Foreign and Commonwealth Office believes that British citizens will continue to be able to visit EU countries without a visa for stays of up to 90 days. British travellers are also advised to get health insurance which will cover them in the countries they visit.

Drivers will require an international driving permit (IDP). Most of the EU is covered by 1968 IDP, but driving in Spain, Cyprus, Ireland and Malta requires a 1949 IDP.

Renewing a UK passport costs £75.50 if you do it online or £85 by post. You should get the new document back within three weeks, assuming no extra information is needed.

The million text messages are part of the government's "Get Ready for Brexit" publicity drive. It is also organising more than 30 events around the country to brief businesses on what preparations they need to make before the end of next month."

This is an open invitation for bad guys to use this deadline and make a killing in phishing. Inoculate your users in the UK against this with the following UK Current Events template: BBC News: New validity rules in event of no deal for Brits travelling to EU.