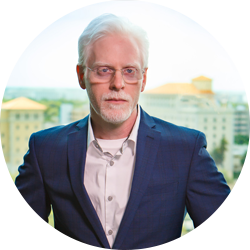 "Safety Detective: Tell me how you got started in the cybersecurity industry and what you love about it.

Perry Carpenter: I had a non-traditional path into cyber. I have two bachelor’s degrees—one in philosophy and another in biblical studies with an emphasis on language. After I finished my degrees, I went to law school for a couple of years and then started a master’s degree in computer science and ended up getting hired out of that program to do computer programming.

I was doing a lot of email work and things that had directory structures and group permissions and all of that. I got drafted into the cybersecurity world and fell in love with it and became an advocate for everything related to security.

The thing that I love about it is that there is a cause, and when you have a cause that you can rally around, keeping the world safe or making something a better place, then that really helps to fuel your reason to get up every morning.

The other thing is that it’s constantly evolving. In one way it’s always the same, but in another way, all of the tactics and the technology that have been universally done for thousands of years on scamming people or tricking people or finding ways to get in and steal money—all of that has been evolving as the digital ecosystems evolve. Finding ways to combat that and to watch that evolution and to see the arms race take place and to be on the side of good within that arms race is a rewarding thing.

SD: What is the main service your company offers?

People are spending money on security by trying to do their best to keep the bad actors out and to keep the data safe, but there’s been a missing piece. From our company’s perspective, that missing piece is an intentional focus on the human layer because of all the money being spent on security solutions, there is only about 3% being spent on anything that has to do with addressing the human layer, which is what we focus on. We do that through training and awareness, through technologies that help push the human into making better decisions that help shape behaviors and ultimately build a cybersecurity culture within an organizational culture.

The way that I would phrase that is that ultimately, we want to help people have the right security knowledge, beliefs, and value systems to security are woven throughout the fabric of their organizational culture."

For the full interview, check out the Safety Detectives blog here.