Over 80% of All Phishing Attacks Targeted U.S. Organizations 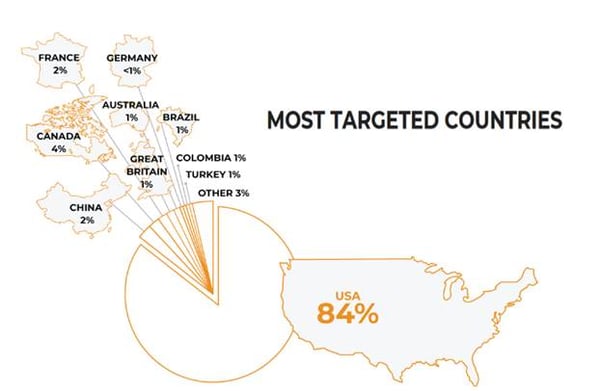 U.S. entities remained the most attractive targets of phishing attacks throughout 2018, with an estimated 84% of the total volume of millions of incidents analyzed during the last year by threat intelligence company PhishLabs.

While in 2017 U.S. organizations were hit by 85% of all phishing attacks launched worldwide and detected by PhishLabs, the 1% decrease in share did not translate into a decrease in overall volume.

This happened because, as PhishLabs' 2019 Phishing Trends and Intelligence Report states, the total phishing volume increased significantly between 2017 and 2018 by 40,9%, rising "steadily during Q1 of 2018, remained high in Q2 and Q3, and declined in Q4."

"This year's report shows how phishing continues to evolve as threat actors adapt to (and exploit) changes in the digital landscape. Targets have shifted, new tactics have surfaced, and attack volume continues to rise," said PhishLabs' Founder and CTO John LaCour.

As PhishLabs further found, the top organizations targeted by phishing attacks when taking into account the industry sectors were financial institutions (28,9%), email and online services (24,1%), cloud and file storage (12,6%), payment services (11,1%), and SaaS (7,2%).

"After being displaced by email/online services in 2017, financial institutions are back on top as the single most targeted industry. While the financial industry’s share of global volume has fluctuated each year, the volume of attacks has consistently risen," says the report.

Free hosting and domains were also increasingly popular among phishing attackers seeing a 200% growth, while free SSL certificates designed to further boost the illusion of the emails coming from a trusted source saw an overall rise in usage of around 50%

In addition, out of the millions of malicious phishing analyzed during 2018 by PhishLabs, only 2% were used for malware delivery (crimeware, RAT, and ransomware), while approximately 65% were part of a credential theft scheme (redirecting to phishing and docuphishing sites), and roughly 33% were email scams (BEC, job scams, tech support, and 419 scam). 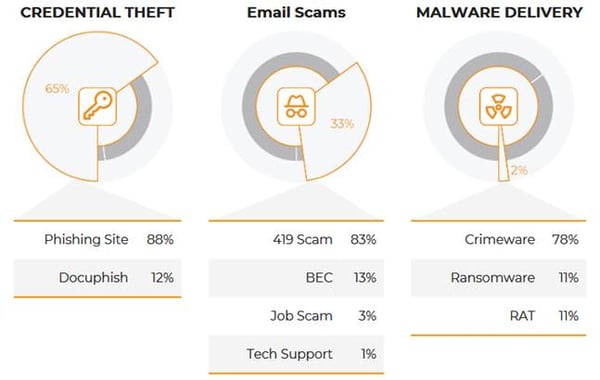 "Novice cybercriminals use phishing to steal credentials and distribute ransomware. Organized gangs use it to carry out financial fraud and steal millions of dollars. Nation-state actors use it to gain strategic access to target environments," states PhishLabs' 2019 Phishing Trends and Intelligence Report.