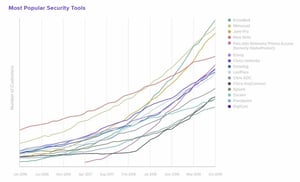 You probably know Okta, they are one of the largest Identity Management players, providing single sign-on and a host of other services. They "see" what everyone is using in the sense of which apps are users are logging on to. Okta used data from 7,400 customers and more than 6,500 cloud, mobile and web app integrations to compile the report.

Techrepublic reported: "For the first time since Okta began reporting on the fastest growing apps in the enterprise six years ago, the list of growing apps and integrations in the Businesses@Work report features six data- or security-focused tools.

"Okta's report confirms what anyone in tech knows: G Suite has gained traction on Microsoft Office 365 and Atlassian Product Suite also gained ground; two of the evolving customer-app preferences. On the number of customers list, Lucidchart and GitHub—see the KnowBe4 Gitlab Case Study— made the top 15 this year." We are talking sheer numbers here though.

How about fastest growing apps?

In 2018, business priorities focused on security and collaboration apps, with six of 10 apps falling into those categories. However, in 2019, the fastest growing apps plus percent growth, focused on big tech and security. Five apps which made the list make a first appearance.

Snowflake, developer-favorite Atlassian, Opsgenie, and Splunk make first appearances on the fastest-growing app list. Okta's report assesses if making the "fastest growing app" list correlates to the company's success and it cites the number one apps of the last five years have "gone on to do big things, securing growth equity or going public: Slack (which held the number one position twice), Zoom, Jamf and KnowBe4. Here is the percentage growth for each app:

And how about cybersecurity apps?

Cybersecurity changes rapidly, "it's a cloud and mobile world," the report declares, adding that the traditional perimeter is gone, and that "people are the new perimeter." With new apps comes new ways for company security teams to protect customers. Notice that KnowBe4 is at the top of this chart! 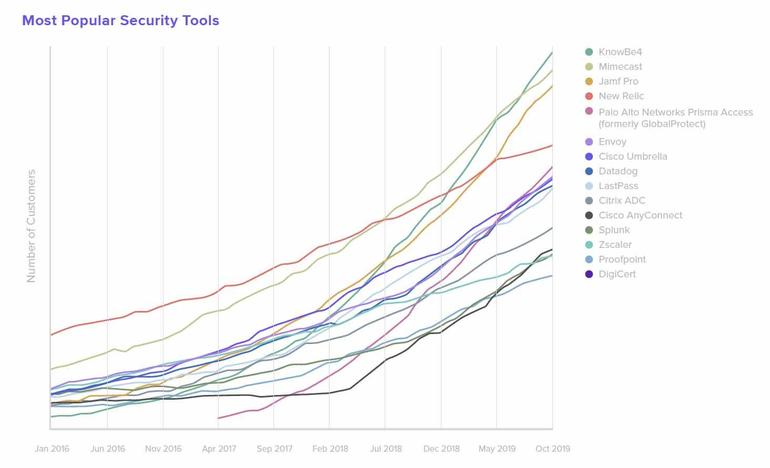 The average company deploys more than 150-security focused tools, and Okta concludes, based on findings of the past four years, there is a new modern security stack consisting of four layers of security, which it designates as:

Using the most popular tool in each of the four security layers, the report presents what it would look like: