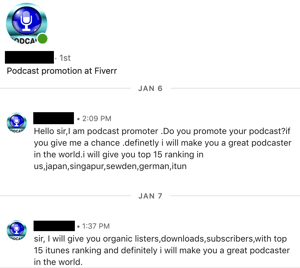 Anyone who depends upon good public opinion can be vulnerable to orchestrated bad word-of-mouth, especially in the form of online reviews.

Podcasters are being targeted by extortionists who threaten to swamp their shows with negative reviews, according to Mark Asquith at Rebel Base Media. Asquith cites one recent case in which a scammer reached out to a podcaster on social media and offered to promote their show.

When the podcaster expressed interest, the scammer didn’t respond for several days. After that, the scammer sent a message informing the target that they’d been promoting the target’s podcast for the past few days. The scammer then demanded hundreds of dollars in payment for this supposed service. “No agreement had even been discussed, let alone signed,” Asquith adds.

When the target refused to pay, the scammer became aggressive, and “threatened to use his ‘network’ to flood the podcaster’s podcast with negative, 1-star reviews across all of the directories, including Apple Podcasts.” He also threatened to get the podcast banned from Apple Podcasts via mass reporting. Asquith warns that “this has all the hallmarks of a scamming tactic likely to become widespread very quickly,” so podcasters and other content creators should be wary.

“Report the social accounts of anyone approaching you with such an offer that meets any of the criteria above or feels illegitimate,” Asquith writes. “Furthermore, it’s best not to engage with people offering this kind of service, just in case.”

Podcasters and others need to know that these extortionists prey on fear to make their targets act irrationally. They’re almost certainly bluffing, and even if they aren’t, review bombing can be reversed. The safest response is to report them and ignore them. If you pay them, they’ll come back for more. New-school security awareness training can help you and your employees react with prudence in these situations.

Rebel Base Media has the story: https://rebelbasemedia.io/podcast-review-extortion/ 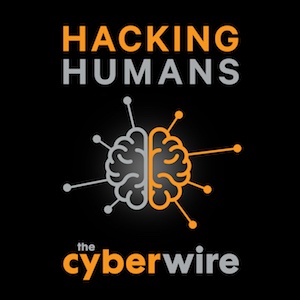 Each week the CyberWire’s Hacking Humans podcast looks behind the social engineering scams, phishing schemes, and criminal exploits that make headlines and take a heavy toll on organizations around the world.

We talk to social engineering experts, security pros, cognitive scientists, and those practiced in the arts of deception (perhaps even a magician or two).

We also hear from people targeted by social engineering attacks and learn from their experiences. Trust us: check out the first episode and subscribe today.