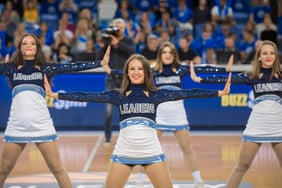 Raffaela Marie Spone, a 50-year-old mom from Pennsylvania, has been arrested after allegedly leveraging deepfake technology to target several of her daughter’s cheerleading rivals.

The incident shows how dangerous deepfake technology is, as Spone used it to tarnish the girls’ reputations. Spone allegedly created deepfake videos that showed the girls drinking, smoking, and naked. The videos were then sent to the cheerleaders’ coach in an attempt to get them kicked off the team.

The altered content was allegedly pulled from the girls’ social media accounts. According to the Hilltown Township Police Department, Spone was previously under investigation after a minor reported being harassed via text message. Additional girls came forward, experiencing the same thing and part of the same cheerleading team, the Victory Vipers.

Spone allegedly also sent the deepfake videos to the girls via text, along with horrific messages telling them to engage in self-harm. Police arrested Stone after discovering evidence on her phone linking her to the texts and images.

This is a looming threat

We need to inoculate our employees against this type of social engineering. KnowBe4 is proud and excited to release a new training module that trains your users to Spot And Stop the Spread of Disinformation. This new module covers the red flags that show an email or social media message might be propaganda and trains the end user to apply critical thinking before they forward damaging disinformation.

We strongly suggest we step your users through this module as soon as possible. You can preview this 15-minute module at the KnowBe4 Modstore right now. See below.