There is a lot to be said for consistency in product names, but when you have dozens of products with multiple versions of each, similar names can get confusing fast. We’re looking at you, Microsoft.

Here Is How It Started

The confusion started out like this: Microsoft in 2017 introduced Microsoft 365, a bundle of existing products under one license, geared towards businesses. The name was similar to the already existing Office 365. In fact, a lot of people already inadvertently called Office 365 by the name Microsoft 365, so it’s easy to see how the two products were confused.

It got even more confusing when you learn Microsoft 365 includes Office 365. Let's break down the differences:

Office 365 is a cloud-based suite of apps and services centered around business productivity. It includes some apps you’re probably already familiar with like Microsoft Outlook, Word, PowerPoint and Excel. Depending on the plan you get, subscriptions also include apps and services like:

And much, much more, along with robust productivity, collaboration, and security features.  Office 365 is a monthly, per-user subscription. There are a variety of plans to choose from depending on your specific needs. Plans can be mixed and matched in your business, and you can change plans at any time.

Microsoft 365 is a bundle of services that includes Office 365. It also includes Windows 10 Enterprise, Enterprise Mobility + Security (EMS), and machine learning. Like Office 365, there are multiple plans to choose from depending on your needs.  The services included in Microsoft 365 are also available as separate licenses.

And Then They Changed The Name

As of April 21, 2020, the official branding of Microsoft's productivity suite has changed from Office 365 to just Microsoft 365. The new naming convention reflects Microsoft's strategy of providing a single complete productivity platform for its customers.

As was the case when the productivity suite was called Office 365, each subscription package of Microsoft 365 includes various familiar applications such as Outlook, Word, Excel, and PowerPoint. Each subscription package will also include various levels of services like Exchange, SharePoint, OneDrive, and Teams.  Here is a picture with the different plans: 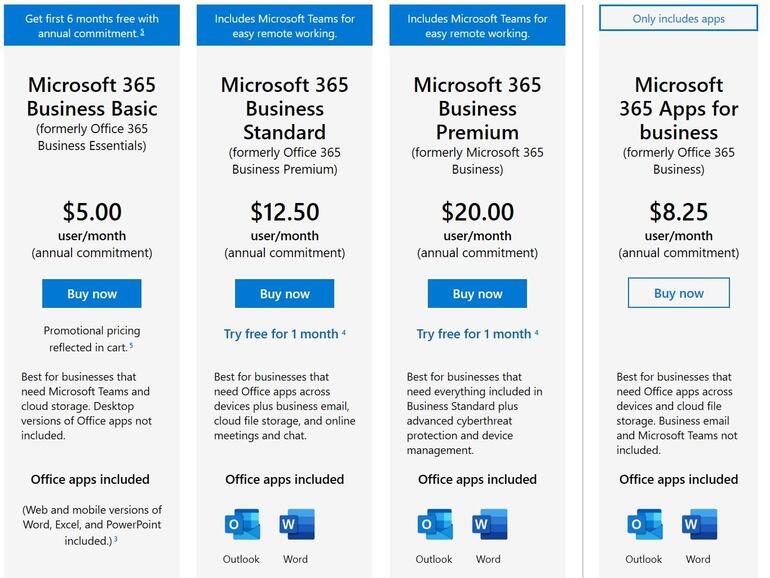 But wait, there's more! There is also a top of the line flavor called Microsoft 365 E5. It combines the above productivity apps with advanced security, compliance, voice and analytical capabilities. This bundle has Microsoft Defender which claims protection against zero-day malware and phishing. Essentially they re-write links and detonate attachments.

This type of defense is certainly needed, but is not foolproof. Every day our customers report malicious emails that have made it through the filters into their user's Outlook inboxes. If your users happen to get social engineered into 'enabling' something or open up a malicious .ZIP attachment, I am not sure how E5 is going to help you there. TechRepublic has more detail about it if you are interested.

Knowing the above, you will now be glad to know that the KnowBe4 platform is integrated with all "365 flavors", including the Phish Alert Button, PhishER's PhishRIP feature, and other more advanced options.