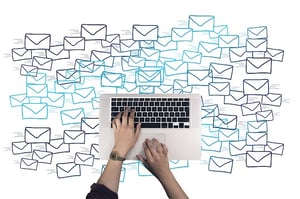 Warwick Ashford at ComputerWeekly reported: "Lateral phishing is a growing type of account takeover that has enabled attackers to target more than 100,000 people by hijacking just 154 email accounts.

Lateral phishing represents a sophisticated evolution in email-based attacks, with 1 in 7 organisations targeted in this way in the past seven months, according to researchers at Barracuda Networks and the University of California, Berkeley.

Account takeover continues to be one of the fastest-growing email security threats, but attackers are starting to adapt, introducing new ways to exploit compromised accounts, such as lateral phishing, which uses hijacked accounts to send phishing emails to an array of recipients in the account’s contact list, ranging from close contacts in the company to partners at other organisations.

Out of the organisations targeted by lateral phishing, more than 60% had multiple compromised accounts.

Some had dozens of compromised accounts that sent lateral phishing attacks to additional employee accounts and users at other organisations.

A recent benchmarking report by security awareness training firm KnowBe4 shows that the average phish-prone percentage across all industries and sizes of organisations at 29.6% – up 2.6% since 2018.

Because lateral phishing exploits the implicit trust in the legitimate accounts compromised, these attacks ultimately lead to increasingly large reputational harm for the initial victim organisation, the researchers said.

To defend against lateral phishing attacks, the researchers said there are three critical precautions organisations can take.

Improving security awareness training and making sure users are educated about this new class of attacks will help make lateral phishing less successful.

As a result, telling users to check the sender properties or email headers to identify a fake or spoofed sender no longer applies. Instead, the destination of all links should be checked carefully.

Because lateral phishing emails come from a legitimate email account, these attacks are becoming increasingly difficult for even trained and knowledgeable users to detect.

Organisations should invest in advanced detection techniques and services that use artificial intelligence (AI) and machine learning to identify phishing emails automatically without relying on users to identify them.

Another recently published study by Barracuda showed that 94% of organisations surveyed believe that email it is still the top security vulnerability.

The survey also found that 87% of respondents expect email threats to increase in the coming year, and 75% reporting a steady increase in email attacks in the past three years.