KnowBe4 is Named Cybersecurity Company of the Decade 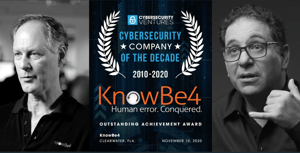 We're pleased to announce that KnowBe4 has been named the Cybersecurity Company of the Decade (2010 - 2020) by Cybersecurity Ventures!

Cybersecurity Ventures noted some key highlights of the company throughout the years, including:

2011 - A year after starting up the business, a provider of internet-based security awareness training, Sjouwerman met Kevin Mitnick, who is widely known as “The World’s Most Famous Hacker.” “I can own 100 percent of a muffin or I can own 50 percent of a really large pie, so what am I going to do?” Sjouwerman asked himself. He went for the pie. “I gave him (Mitnick) half the company for his 30 years of hacking experience. The rest is history.”

2013 - I became the Chief Editor for “CyberheistNews” and by 2013 it amassed 140,000 subscribers, a popular read on the niche top of social engineering and training employees to be cyber safe.

2014 - We showed up on the Gartner Magic Quadrant for Security Awareness Computer-Based Training in 2014 — and the entire cybersecurity community took notice.

2015 - We became the world’s most popular integrated Security Awareness Training and Simulated Phishing platform in 2015, with more than 1,000 enterprise customers using it to school their employees on cybersecurity.

2019 - We're featured in a documentary — “KnowBe4: The Making Of A Unicorn” — a cybersecurity story told by Sjouwerman, Mitnick, early employees, and investors.

For the full story, check out Cybersecurity Venture's article. With many more years to come, we're excited to see what comes next. Let's continue to stay safe out there!