Dashlane today announced its third annual list of the “Worst Password Offenders.” The list highlights the high-profile individuals and organizations that had the most significant password-related blunders in 2018.

Dashlane found that the average internet user has over 200 digital accounts that require passwords, and the company projects this figure to double to 400 in the next five years. “The sheer number of accounts requiring passwords means everyone is prone to make the same mistakes as the Password Offenders,” states Schalit. “We hope our list serves as a wake-up call to everyone to follow the best password security practices.”

Dashlane’s “Worst Password Offenders” of 2018, from worst to best:

Learn from the mistakes of this year’s Password Offenders:

1. Password protect all accounts: Whether it’s a server, email account, or an app, you should always secure your data with passwords as they’re the first, and often only, line of defense between hackers and your personal information.

2. Use strong passwords: Never use passwords that are easy to guess or that contain names, proper nouns, or things people can easily research about you—like your favorite hazelnut spread! All your passwords should be longer than eight characters and include a mix of random letters, numbers, and symbols. Even better, use a generator to come up with them for you.

3. Never reuse passwords: Every one of your accounts needs a unique password. The risk in password reuse is that hackers can use passwords from compromised accounts to easily access other accounts. The only protection against this is to have a different password for every account.  Source  https://blog.dashlane.com/password-offenders-2018/ 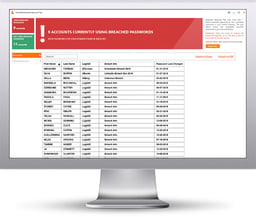 Which Of Your User's Passwords Are Breached?

KnowBe4’s Breached Password Test (BPT) checks to see if your users are currently using passwords that are in publicly available breaches associated with your domain. BPT checks against your Active Directory and reports compromised passwords in use right now so that you can take action immediately!

Find out now which users are using hacked passwords: