Stu Sjouwerman
John Podesta, Chairman of the 2016 Hillary Clinton presidential campaign was a victim of social engineering and  rushed advice from his IT helpdesk. It's a comedy of errors. The helpdesk should have included the instruction: "DO NOT CLICK ON THE LINK."
Podesta was sent a Google credentials phish that spoofed a security alert notice from Google -- one of the most common phishes that we see in the Phish Alert Button emails that customers send us. In Podesta's case the bad guys used a bit.ly link -- something else we see all the time. The actual email was just revealed in a Wikileaks data dump: 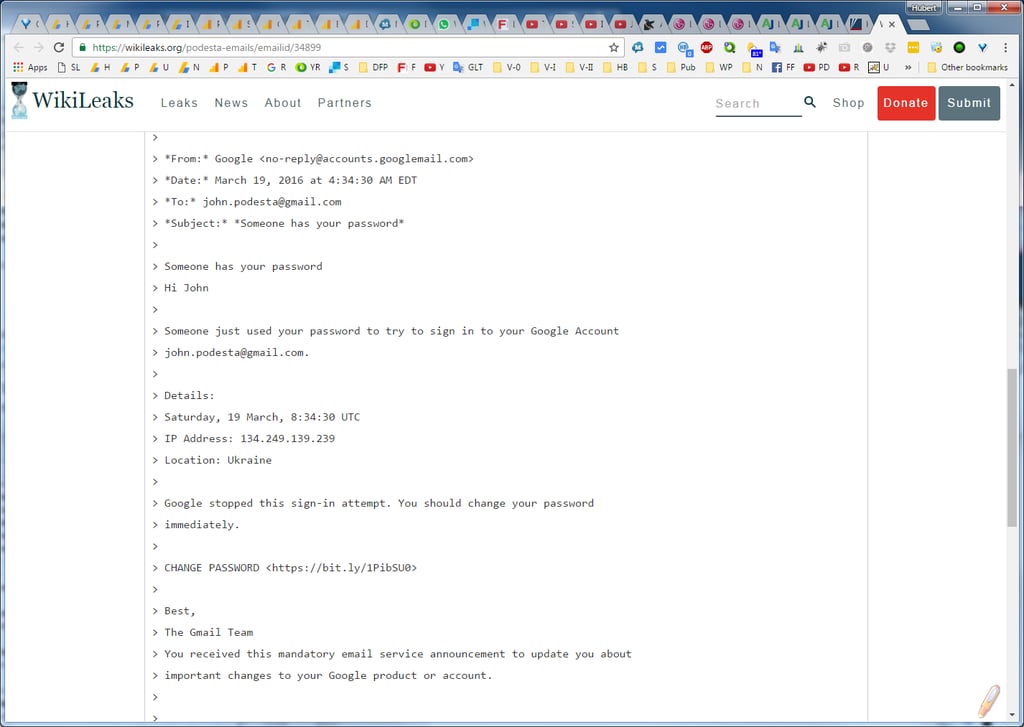 Podesta’s chief of staff, Sara Latham, forwarded the email to the operations help desk of Clinton’s campaign, where staffer Charles Delavan in Brooklyn, New York, wrote back 25 minutes later, “This is a legitimate email. John needs to change his password immediately.”

But the email was a sophisticated Russian phishing attack

The link to the website where Podesta was encouraged to change his Gmail password actually directed him instead to a computer in the Netherlands with a web address associated with Tokelau, a territory of New Zealand located in the South Pacific.

In the email, the hackers even provided an Internet address of the purported Ukrainian hacker that actually traced to a mobile communications provider in Ukraine. Also note that the hackers struck Podesta on a weekend morning, when organizations typically have fewer resources to investigate and respond to reports of such problems.

The help-desk staffer, Delevan, emailed to Podesta’s chief of staff a separate, authentic link to reset Podesta’s Gmail password and encouraged Podesta to turn on two-factor authentication; “It is absolutely imperative that this is done ASAP,” Delevan said.

Tod Beardsley, a security research manager at the Boston-based cybersecurity firm Rapid7, said the fact that an IT person deemed the suspicious email to be legitimate “pretty much guarantees the user who is not an IT person is going to click on it.”

New-school security awareness training which includes frequent simulated phishing attacks for both Podesta and the IT help desk staffer could have prevented this disaster. Get a one-on-one live demo and see for yourself how easy and affordable this is for your organization.