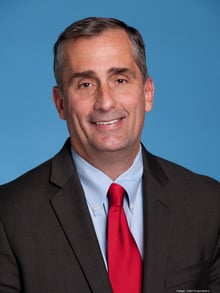 Apparently Intel's institutional knowledge got lost or was disregarded. Another CEO took the reigns 12 years later and in 2010 surprised everyone by acquiring Symantec's arch-rival McAfee for over $7.6 billion, apparently expecting a lift from the hot security market. Well, that only happens when you buy the right product. The plan was to embed cybersecurity functionality on Intel chips but that was never completed.

After rebranding McAfee to Intel Security (we all know why!) and six years of disappointing results, the Silicon Valley Business Journal reports that Intel's CEO Brian Krzanich (picture right) thinks antivirus is shit after all and is planning to sell of that unit.

They quoted the Financial Times saying Intel has been talking to bankers about the future of its cyber security unit in a deal that would be one of the largest in the sector, according to people close to the discussions. Krzanich announced plans in April to slash 12,000 jobs as he pushes to refocus the business he took charge of last year. He is concentrating on chips for data centers and the Internet of Things and moving away from the long-declining personal computer business.

Graham Cluley commented: "Leave it another 12 years, and who knows if Intel will be tempted to buy into the computer security business again? I guess if they do they'll be hoping it's a case of third time lucky."

Antivirus is getting increasingly useless these days. Ransomware attacks in many cases sail right through all the filters because they rely on social engineering the end-user and contain no malware in either the body or the attachment. The bad guys can easily find the email addresses of your users, called your "phishing attack surface".

Want to see how big your phishing attack surface is? How many of your email addresses can be found by the bad guys on the Internet, and used for a spear-phishing attack? Get your one-time FREE Email Exposure Check now.