[INFOGRAPHIC] Cybercrime Pulls In A Million Bucks A Minute 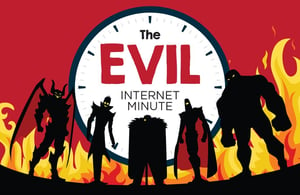 More than a million dollars is lost every minute to cybercrime. That staggering stat comes to us by way of RiskIQ who published new research showing that despite businesses spending roughly 171K every minute on cybersecurity, 1,1M is lost to cybercrime.

Their research found that every 60 seconds:

It also found that a new phishing domain appears every five minutes, and a new site running the CoinHive cryptocurrency mining script was detected every 10 minutes.

In an email to Infosecurity, security author Raef Meeuwisse said that cybercrime continues to be a profitable industry, and cyber-criminals continually evolve their tactics to remain one step ahead of the average cybersecurity function.

He said: “Cybercrime and cybersecurity co-exist in a constant cycle of innovation. As one particular criminal trend towards a particular technique increases, so the security functions create or strengthen the required defenses.

“However, it is evident at both the level of personal and organizational cybersecurity that spending is usually too low. In fact, most of these cyber-criminals are not going after the hard targets with great defenses, they are targeting the low hanging fruit – and there is still far too much of it.”

RiskIQ CEO Elias Manousos said: “Leveraging the latest research as well as our own global threat intelligence, we're defining the sheer scale of attacks that take place across the internet to help businesses better understand what they’re up against on the open web."

The RiskIQ report is here, registration is required, but here is the RiskIQ Infographic: