According to Bleeping Computer, Microsoft reported that a large business email compromise (BEC) campaign has targeted dozens of organizations. The industries targeted varied from real estate to professional services.

BEC attacks are a type of CEO Fraud, and these scam artists use social engineering tactics to trick victims into compromising their business email accounts which would be redirected to their own control. The Microsoft 365 Defender Threat Intelligence Team said in a statement, ""We observed patterns in using the correct domain name but an incorrect TLD, or slightly spelling the company name wrong. These domains were registered just days before this email campaign began".

Microsoft noted that these cybercriminals used fake replies to make the email seem more legitimate. Below is an example of one of these types of emails reported: 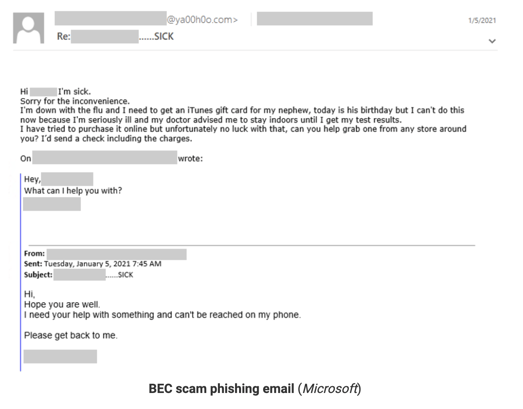 The cybercriminals are getting more sophisticated by making the email appear to be a previously replied email. The recipient, sender, and subject in the email body this email could fool anyone who is not aware of this type of attack.

When we reported the FBI IC3 2020 Crime Report, it was noted that the most money lost was due to BEC scams. This will continue to trend in future years unless measures are taken. New-school security awareness training can teach your users the common red flags to spot when they receive a suspicious email.

Bleeping Computer has the full story.