Here is a Spam Message from 1864, as Old as the Victorian Internet 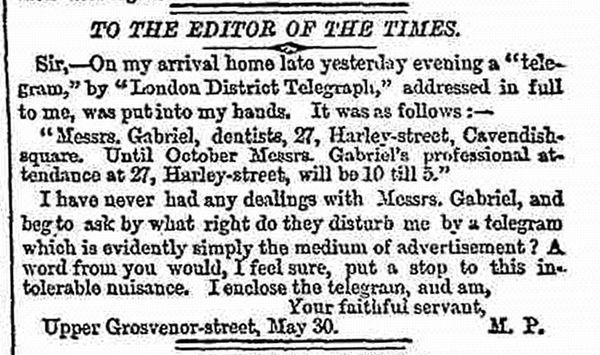 If you thought spam was just a twenty-first-century thing, think again. As usual, most things that seem new have pretty deep roots. Most of us can see spam's ancestry in junk mail, but it was being delivered electronically a century and a half ago. The Times of London published this complaining letter on May 30th, 1864:

Sir,—On my arrival home late yesterday evening a "telegram," by "London District Telegraph," addressed in full to me, was put into my hands. It was as follows:—"Messrs. Gabriel, dentists, 27, Harley-street, Cavendish-square. Until October Messrs. Gabriel's professional attendance at 27, Harley-street, will be 10 till 5." I have never had any dealings with Messrs. Gabriel, and beg to ask by what right do they disturb me by a telegram which is evidently simply the medium of advertisement? A word from you would, I feel sure, put a stop to this intolerable nuisance. I enclose the telegram, and am,  Your faithful servant, M.P.  Upper Grosvenor-street, May 30.

We feel for you, M.P., across the years, especially if the bearer of the telegram expected to be tipped. But in some ways that was a more innocent time. We had to deal with a telephone pollster recently who did not understand the words, "I am not registered in that party, and so will not vote in its primary."

Some lessons endure. Shakespeare said, "Wars and lechery—nothing else holds fashion." He might have added "except for maybe advertising." Anyway, if your organization is as vexed by spam as M.P. was by the telegram, consider some new-school training to handle an old-school problem. Today in Infosec has this charming and nostalgic story: https://twitter.com/todayininfosec