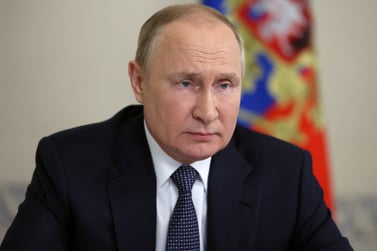 The Wall Street Journal just reported that Russian intelligence agencies have increased the pace of cyberattacks against nations that have provided aid to Ukraine, according to new research published Wednesday by Microsoft, which said it had observed Moscow-backed hacking attempts in over 40 countries.

"Much of the malicious cyber activity linked to the Kremlin took aim at governments that are part of the North Atlantic Treaty Organization for espionage, and targets also included nongovernmental organizations, think tanks and humanitarian groups providing support to Ukrainian refugees, as well as information-technology and energy firms, Microsoft said.

The U.S. saw the most of any country outside Ukraine, accounting for 12% of the global total since the war in Ukraine began, the tech company said."

The picture above is Russian President Vladimir Putin in a meeting with members of the Security Council via video link on June 22, 2022. Here is a link to the full article at the WSJ. This is a good link to attach to a budget request for new-school security awareness training.