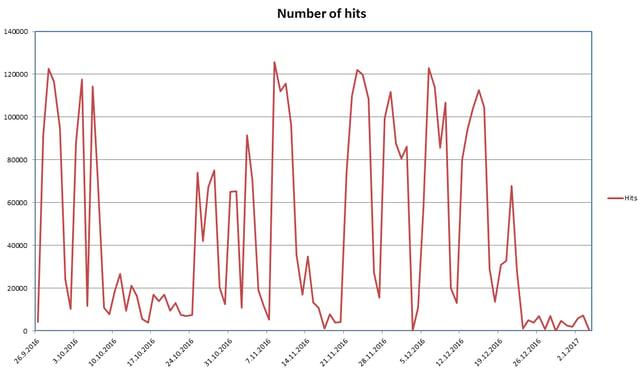 Jan Sirmer at the Avast blog wrote: "Based on analysis of past Locky ransomware attacks, experts in the Avast Threat Labs predict that another attack is imminent.

Locky has taken a holiday of sorts. Avast detection of Locky shows that attacks have slowed down considerably during the days before Christmas through New Year and leading up to Eastern Orthodox Christmas, which is celebrated in Russia on January 7.

The Avast Threat Lab analyzes the lifecycle of Locky, and they can see small peaks, new spread methods, new binaries etc., usually occurring before a new campaign starts. The graph above shows data for the last one hundred days based on the number of Avast users who saw the Locky downloader. Notice that a slow-down occurs for several days before a new round of attacks; but this time it’s been more than 15 days, which doesn’t fit the pattern. The drop between attacks is not typically as significant as it has been during the 2016-17 winter holiday period.

When we consider why the incidents of Locky dropped during the last 15 days we have to wonder:

Well,  don't count on them going out of business. They have celebrated an incredibly profitable 2016 and we are expecting a new Locky ransomware campaign, starting the week of January 9th forward.

Get your Ransomware Hostage Rescue Manual.