Game of Thrones as Phishbait, with Hook 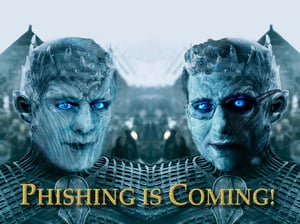 Game of Thrones is the top TV show used to deliver malware-infected pirated content, researchers at Kaspersky Lab have found. Threatpost says the researchers saw nearly 21,000 users attacked in 2018, even though no new episodes were released last year. These numbers are expected to spike this year, when the eighth and final season of the show is released on April 14.

“The first and final episodes, attracting the most viewers, are likely to be at greatest risk of malicious spoofing,” said Kaspersky researcher Anton Ivanov. “Online fraudsters tend to exploit people’s loyalty and impatience, so may promise brand new material for download that is in fact a cyber threat.

Keeping in mind that the final season of Game of Thrones starts this month, we would like to warn users that it is highly likely there will be a spike in the amount of malware disguised as new episodes of this show.”

New episodes aren’t the only ones at risk, however. The pilot episode of the first season was the most popular and effective for use in attacks, followed closely by the first episode of the seventh season. Kaspersky observed more than five hundred different malware families delivered via pirated Game of Thrones episodes over the course of two years.

Threatpost says the best way to avoid these infected files is to watch shows through the legal and legitimate content provider, since there’s no way to know for sure that an unofficial download is safe. Even if they don’t download pirated files, however, users should still be able to identify malicious files by their file extensions. New-school security awareness training can help your employees form good security habits.

Threatpost has the story: https://threatpost.com/game-of-thrones-malware-piracy/143318/