From the Phishing Archives: Just How Far Will Cybercriminals Go for a Scam? Apparently into Outer Space.

The Nigerian Prince scam was found taking a turn upwards to the stars, seeking your help to bring a poor lonely astronaut home. 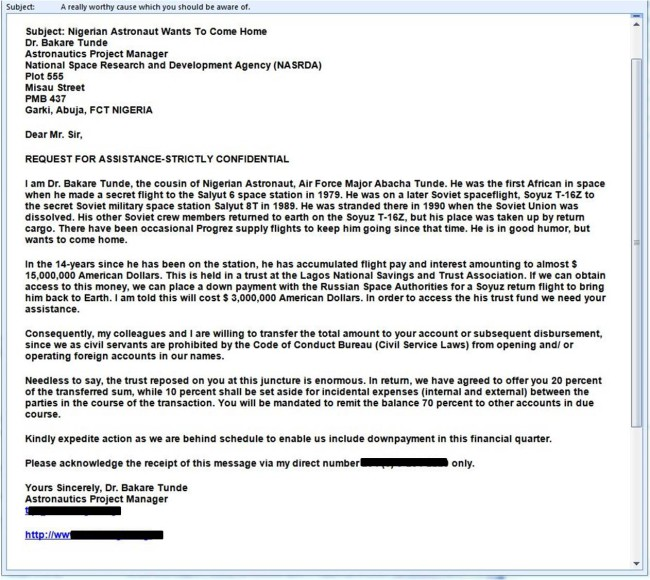 It seems the most well-known email scam around was reborn in recent years with a new twist: it’s not a prince that needs your help, it’s a stranded astronaut. A scam definitely to be placed in the “are you flippin’ kidding me?” file, I couldn’t help but laugh at the absurdity of the scam’s premise:

The remainder of the scam follows the traditional format – we send you the entirety of the larger sum, you keep a percentage, and send us back the rest. No doubt, there will be some bank fee that will need to be paid (by the victim) at some point during the scam.

While the basic scam is so old, it’s unlikely that anyone today would fall for it, it’s a reminder that cybercriminals have exponentially improved their game in only a matter of 2-3 years. The poorly-written, badly-formatted emails now look like the real thing. Their timing, context, sender detail, and domain are often spot on, causing even the savviest of user to fall victim.

So, while your organization’s security awareness program may not need to cover Nigerian astronauts as part of its most current training, it does need to convey to your users that scammers will stop at nothing to trick your users into making them an unwitting accomplice in a data breach.