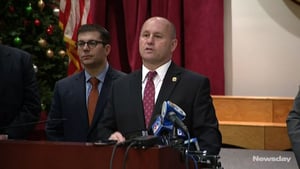 Finally some good news. Newsday reports that in record time, Nassau County, New York, recovered $710,000 that was transferred to scammers who were impersonating an existing county vendor.

You should watch the video (link below) how these bad guys did it... very sophisticated. They followed full protocol and supplied all the paperwork necessary to have the change made. They even sent a fraudulent check as part of this process.

The county made the change and the payment was sent to a bank account in Seattle. It was then transferred to a number of different accounts. The comptroller notified the police as soon as they realized what had happened, and investigators were able to freeze the bank accounts before the money disappeared.

Excellent work by the staff who figured out what was going on!

Nassau Police Commissioner Patrick Ryder said at a press conference: “Many times we talk about the scams on our elderly, how they can get fooled, but government can become a victim too,” Ryder said. “If it weren’t for the coordinated effort and initial contact from the comptroller’s office, the money may not have been recovered because it moves quickly.”

Ryder added that the spear phishing scheme was widespread and targeted many organizations around the country. In addition to Nassau County, the police found three other unnamed municipalities that had been in the scammers’ crosshairs. The police are now trying to track down the fraudsters so they can make arrests, although it’s still not clear if the perpetrators are in the US.

“In the digital age, cyberattacks target municipalities throughout the country, costing taxpayers and residents millions of dollars,” Schnirman said. “This malicious attempted cybercrime was thwarted, and taxpayers were protected due to the efforts of this coordinated investigation.”

New-school security awareness training can give your employees a healthy sense of suspicion by teaching them how scammers operate, enabling them to thwart social engineering attacks before they succeed.

Newsday has the story: https://www.newsday.com/long-island/nassau/nassau-county-comptrollers-office-scam-1.40469915

CEO fraud has ruined the careers of many executives and loyal employees. Don’t be the next victim. This manual provides a thorough overview of how executives are compromised, how to prevent such an attack and what to do if you become a victim.