[Eye Opener] Work In IT? You Get Attacked Much More Than Other Employees 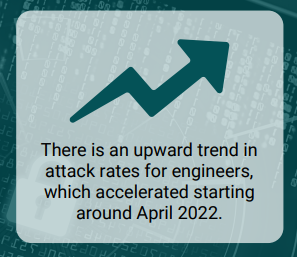 We received an interesting email from Elevate Security you need to be aware of. Their recent research showed: "Social engineering attacks are growing more sophisticated every day, victimizing your workforce users and triggering security breaches. The worst part? Social engineering attacks are on the rise. And your IT engineers and developers are being attacked more often than other organizational departments."

July 2022, IT engineers were targeted 8x more often than non-engineers

They continued: "Since April 2022, social engineering attacks on IT engineers, on average, have increased 142% from 5.79 times per month to 8.25 times per month. In fact, in July 2022, IT engineers were targeted 8x more often than non-engineers. They published an infographic that illustrates this increased risk. "

Elevate Security notes that although engineers are not inherently riskier than other workforce users, this increased frequency of attacks raises their likelihood of unintentionally triggering a security breach, regardless of their behavior.

They invited us to check out their infographic, The Rise of Social Engineering Attacks: An Overview of the State of Cybercrime to explore the state of cybercrime and social engineering attacks as they stand today, and they even mentioned Kevin Mitnick, our Chief Hacking Officer.  Recommended.