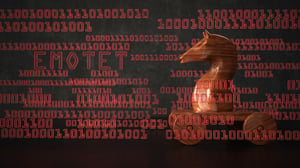 The malicious documents are simple and well-crafted to make the attack more convincing, but they may contain typos that could tip off an observant user. In an example presented by Malwarebytes, the document simply states, “Operation did not complete successfully because the file was created on iOS device. To view and edit document click Enable Edition and then click Enable Content.”

If the user clicks “Enable Content,” the document will run a macro that will download and install Emotet on their system. Even if a document doesn’t contain any typos, however, users need to know that they should never enable macros in a document.

The researchers warn that, while Emotet itself is a versatile and formidable piece of malware, these attacks are particularly dangerous because they often precede targeted ransomware attacks.

“The Emotet Trojan was by far the most visible and active threat on our radars in 2018 and 2019—right up until it went into an extended break,” the researchers explain. “Emotet is used by cybercriminals as the initial entry point, followed by a dwell time that can last days or weeks. In the meantime, other threats such as TrickBot can be delivered as a secondary payload. The real damage that an Emotet compromise causes happens when it forms alliances with other malware gangs and in particular threat actors interested in dropping ransomware.”

Most Emotet infections can be prevented if users follow simple best practices related to emailed links and attachments. New-school security awareness training can teach your employees how to avoid falling for both untargeted malicious spam as well as sophisticated spear phishing attacks.

Malwarebytes has the story.