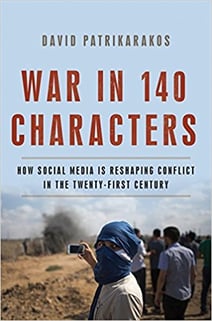 From the back cover: "Modern warfare is a war of narratives, where bullets are fired both physically and virtually. Whether you are a president or a terrorist, if you don't understand how to deploy the power of social media effectively you may win the odd battle but you will lose a twenty-first century war.

Here, journalist David Patrikarakos draws on unprecedented access to key players to provide a new narrative for modern warfare. He travels thousands of miles across continents to meet a de-radicalized female member of ISIS recruited via Skype, and a liberal Russian in Siberia who takes a job manufacturing "Ukrainian" news.

Vitaly Bespalov was offered a high-paying job at a digital publisher. He was suspicious but joined the staff of the website worldukraine.com.ua anyway because he was out of work. The “.ua” web address falsely suggested that the site was based in Ukraine and staffed locally when it was, in fact, based in St. Petersburg and staffed by Russians. He discovered that his job was to outrage Russian speakers in Ukraine and keep them on Mr. Putin’s side.

Bespalov found himself working in a troll factory operated by a Putin crony. On the first floor of the offices, a dozen news websites peddled disinformation, also known as fake news. A team on the second floor created propaganda posts on Facebook, Twitter and the Russia-based messaging service VKontakte. Bloggers on the third floor wrote fake items pretending to be persecuted Russian speakers in Ukraine or pro-Putin Americans.

You can see the book here at amazon.

I strongly suggest you get a quote for new-school security awareness training for your organization and find out how affordable this is. You simply have got to start training your users ASAP, because nation states are fighting a cold war using the internet but legally you are required to take reasonable measures against threats like this. Get a quote now and you will be pleasantly surprised.