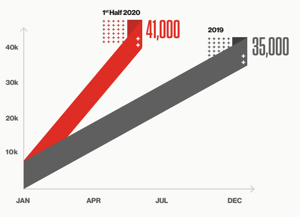 According to a recent study conducted by cybersecurity firm CrowdStrike, recent threat activity throughout its customers’ networks has shown more intrusion attempts within the first half of 2020 than in all of 2019.

This may be due to the pandemic and subsequent lockdown measures forcing employees to mass shift to teleworking. This may also be due to the growing availability of ransomware-as-a-service. Between January 1 and June 30 of 2020,

CrowdStrike believes that the biggest cause for the dramatic increase in threat activity was the adoption of teleworking as a result of the COVID-19 pandemic, stating that the switch was too sudden and expanded several organizations’ attack surfaces by an unpredictable amount.

Threat actors jumped on the opportunity to exploit these newly increased attack surfaces and were more successful than in recent years as well. Extortion attacks were also up this year, with threat actors using ransomware to steal sensitive personal data and then threaten to release it if ransom demands were not met.  Get the full report here.