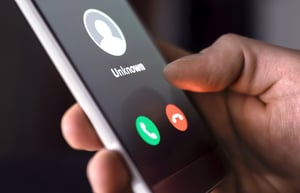 An elderly couple in Tennessee avoided falling victim to a scam by recognizing the signs of social engineering, WREG reports. Kay and Bill Pritchett received six different phone calls from a scammer claiming to be from Publishers Clearing House. The scammer told Bill that he had won a runner-up prize.

“He said you have won a million and a half dollars,” Bill said. “I thought wow, too. He said you have won a 2020 Mercedes automobile. The only problem with that is we only have three colors left. I can see where someone would fall for this. With COVID and people hurting for money and all that. He said, by the way, he also said you get 3,000 dollars a week for life.”

Notably, the scammer didn’t ask them for money. Instead, he instructed Bill to set up a new checking account.

“He wanted me to go to my bank and open a checking account in my name,” Bill. “He stressed right then, don’t put any money in it. And, get a photocopy of your identification so we can verify that it is you.”

Fortunately, Bill and Kay knew this would set them up for identity theft and they refused to comply, despite the scammer calling them repeatedly. Even so, the couple said this scammer was more persuasive than others they had encountered, since it was a real person on the line.

“The thing about him was he was good at what he done,” Bill said. “He was a salesman.”

WREG notes that Publishers Clearing House doesn’t call winners ahead of time, they won’t ask for personal or financial information. Kay pointed out that scammers take advantage of people’s emotions to get them to act against their better judgement.

“You want to make money; you want something free,” Kay said. “It’s like playing scratch tickets, you want that money, right now. So it is tempting to do it.”

While Kay and Bill avoided falling for the scam, the couple decided to share their story to help other people be vigilant.

“You get senior citizens like us, even young people, fall for stuff like this all the time,” Kay said.

New-school security awareness training can help your employees defend themselves against scams in their personal and professional lives.

WREG has the story.