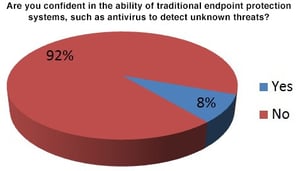 company with a new antivirus mousetrap, so it will try to make old mousetraps look, well... old.

However, they do point out correctly that traditional antivirus is starting to get smelly. They are repositioning antivirus as "detection" tools and present themselves as "prevention", which in itself is a bit of a cheesy marketing tactic.

Users are the Greatest Risk To The Organization

When asked, “which do you feel are the greatest areas of risk to your organization?” the overwhelming response was the user, which makes sense considering their tendency to click on anything, open anything and circumvent security controls that they find restricting.

Less confidence in legacy detection solutions - An overwhelming majority of respondents (92 percent) said they have lost confidence in the ability of traditional endpoint protection solutions, such as antivirus and white listing, to detect unknown threats like zero-day attacks. Additionally, 78 percent believe antivirus is not effective against general cyber attacks.

The IT pros surveyed correctly observed that prevention is the most important. Remember the old expression about an "ounce of prevention". It's obvious that effective security awareness training should be an important part of your security puzzle, and gives you a lot of bang for your security budget buck

Combined on-demand, web-based training and frequent simulated phishing attacks are a great way to keep your end-users on their toes with security top of mind. Find out how affordable this is for your organization and be pleasantly surprised.