CISOs: Users and Collaborative Security Efforts are the Key to Protecting the Organization from Attack 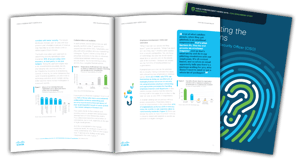 Cisco’s CISO Benchmark Report 2019 focuses on the need for security collaboration between internal teams and the inclusion of users as part of an effective cybersecurity program.

We’re big proponents of leveraging every part of the organization – including the user – as part of your security stance. Communication between departments, teams, and users is critical to creating a security culture within the organization. The latest data from Cisco shows how CISOs with collaborative approaches to security are creating a more secure environment.

The old adage “it takes a village” is especially true when it comes to security. The legacy idea of IT and Security teams being solely responsible for security is no longer an approach CISOs see as viable. Instead getting both IT and users to come out of their silos to collaborate on solving the problem of cybersecurity is the beginnings of a means to establish both a security culture and a secure organization.