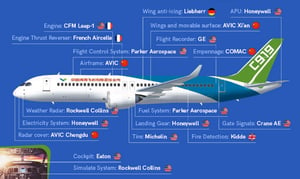 Crowdstrike just released an explosive report which details the lengths China went to narrow the gap of the technological delta between them and market leaders like Boeing and Airbus.
The report published exposes one of China's most ambitious hacking operations up to now. It involved Ministry of State Security officers, the country's underground hacking scene, legitimate security researchers, and insiders at companies all over the world.
The hacking operation was geared to get intellectual property and to help Comac, a Chinese state-owned aerospace manufacturer, build its own airliner, the C919 airplane, to compete with industry rivals like Airbus and Boeing.
A new report published by Crowdstrike shows how this coordinated multi-year hacking campaign systematically went after the foreign companies that supplied components for the C919 airplane.

The end goal, Crowdstrike claims, was to acquire the needed intellectual property to manufacture all of the C919's components inside China.

Crowdstrike claims that the Ministry of State Security (MSS) tasked the Jiangsu Bureau (MSS JSSD) to carry out these attacks.

The Jiangsu Bureau, in turn, tasked two lead officers to coordinate these efforts. One was in charge of the actual hacking team, while the second was tasked with recruiting insiders working at aviation and aerospace companies.

Fascinating reading. Here are two links. The first one is the executive summary over at ZDNet, the other is a PDF to the full report. Great for a lunch break.