Ponemon: Phishing part of 50% of APT's 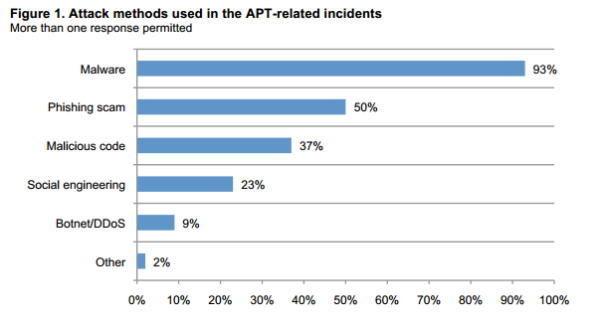 Kelly Jackson Higgins at DarkReading wrote: "Advanced persistent threat (APT)-style attacks may be even more pervasive than thought: Organizations have suffered on average of nine such targeted attacks in the past 12 months, a new study finds.

Even more chilling: Nearly half of those organizations say the attackers successfully stole confidential or sensitive information from their internal networks, according to a new report by the Ponemon Institute called "The State of Advanced Persistent Threats," which was commissioned by Trusteer. Ponemon surveyed 755 IT and IT security professionals who have had firsthand experience with prevention or detection of targeted attacks on their organizations."

The graph above describes the way the top six attack methods the bad guys used got into the network. Very interesting to see that phishing and social engineering are well up there.

Trusteer's Tubin says the actual numbers of APT targeted attacks per year, as well as the percentage of successful ones that exfiltrate information, are probably even higher than the Ponemon report shows. "Newer attack techniques that bypass detection technologies are not being picked up," he says. This stuff is very stealthy ... it sits on the network for a very long time, so it's very likely these companies have additional APTs going on that they just haven't discovered yet."
You can register for and download the full report at Trusteer